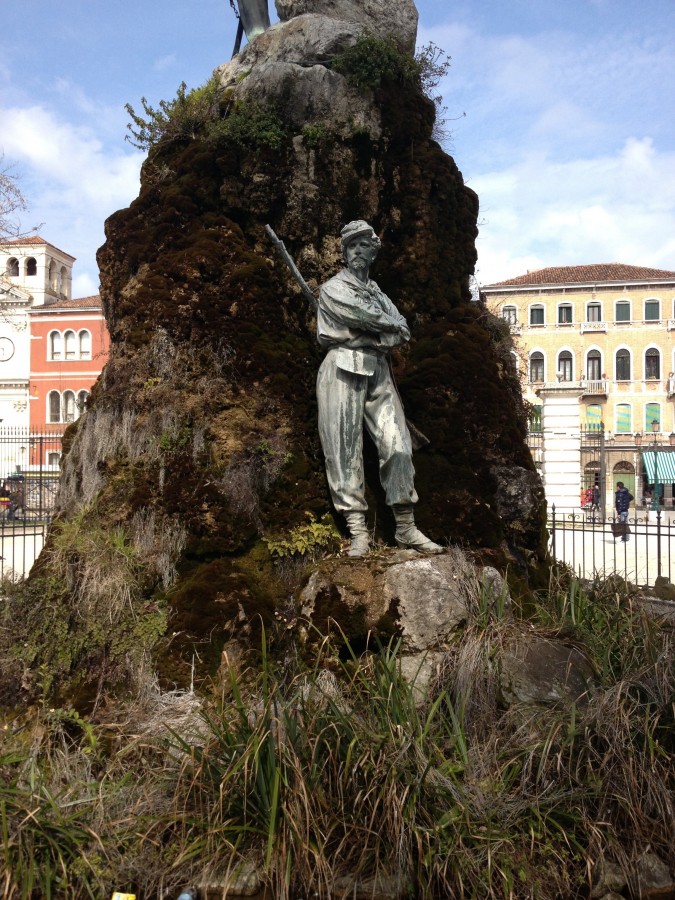 WE CAN SEE the statue of Giuseppe Garibaldi from the entrance to the gardens on the Rio Terra Garibaldi. But we are not here to admire the man called the father of the Italian nation but rather a small soldier who guards his back.

His name is Giuseppe Zolli who in 1860 was one of 1,000 red-shirted soldiers who fought their way up from Sicily into Naples before their General, Garibaldi, handed the conquests over to King Victor Emanuele II whose huge statue stands further back down the Riva degli Schiavoni. This was all part of the creation of modern Italy although Venice had to wait until 1866 until Italian troops finally marched into the city.

In honour of the leader of the soldiers, the Venetians renamed the avenue in Garibaldi's name and the statue, with a grateful Venetian lion laying at his feet, was erected in 1885. But what has this to do with one of his soldiers, Giuseppe Zolli?

Many years later, in September 1921 to be be precise, a worker from Castello was attacked on approaching the statue being hit painfully hard on his arm by what he described as 'A red shadow.' The worker, a man named Vincio Salvi, was not known as a drunkard or to exaggerate but he showed his friends in a local tavern the bruises that had been inflicted on him my this mysterious attacker.

Salvi had been out collecting snails for his supper and told his friends, 'You know how far that statue is from the trees. I swear there was no one there, and anyway, how could he have escaped? Just as it appeared, the shadow disappeared into thin air. A red shadow.'

Opinion was divided about Salvi's story. Those who believed him and those that thought the the red shadow (l'ombra rossa) had come out of a bottle. Un'ombra is a glass of wine in Venetian parlance. But the excitement about the encounter soon waned until it happened again.

This time a courting couple looking to be alone were hit by the red shadow and the following evening a local fisherman ended up with a large bump on his head as he was walking close to the statue. Depending on who you listen to either the police were informed or a number of local men decided to take matters into their own hands and go down to keep watch one evening.

Either way, two of them went forward from the group and put their hands on the rails of the statue only to be struck by what appeared to be a bolt of red lightning. As they were thrown backwards the red shadow changed into the shape of a man wearing a red shirt. 'I know that man,' cried the youngest amongst them, 'it's old Bepi the Garibaldino. He always used to sit at the statue and when I asked him why he came every day he said "I will always guard my General's back and when I am no longer here I will do it from Heaven".'

Old Bepi was Giuseppe Zolli, who had been born in Venice in July 1838 and, when in his early 20s, had enlisted in Garibaldi's army. He had died only a few weeks earlier. The news spread throughout Castello and guards had to be called to keep the crowds away from the statue trying to catch a sight of the aggressive red ghost.

It was decided that the best thing to do was to commission a statue of Zolli in his army gear and place it guarding Garibaldi's back. From that day onwards neither the red shadow nor Zolli's ghost were ever seen again. His ashes lie on the cemetery island of San Michele alongside his two sons, Euclide and Mameli.