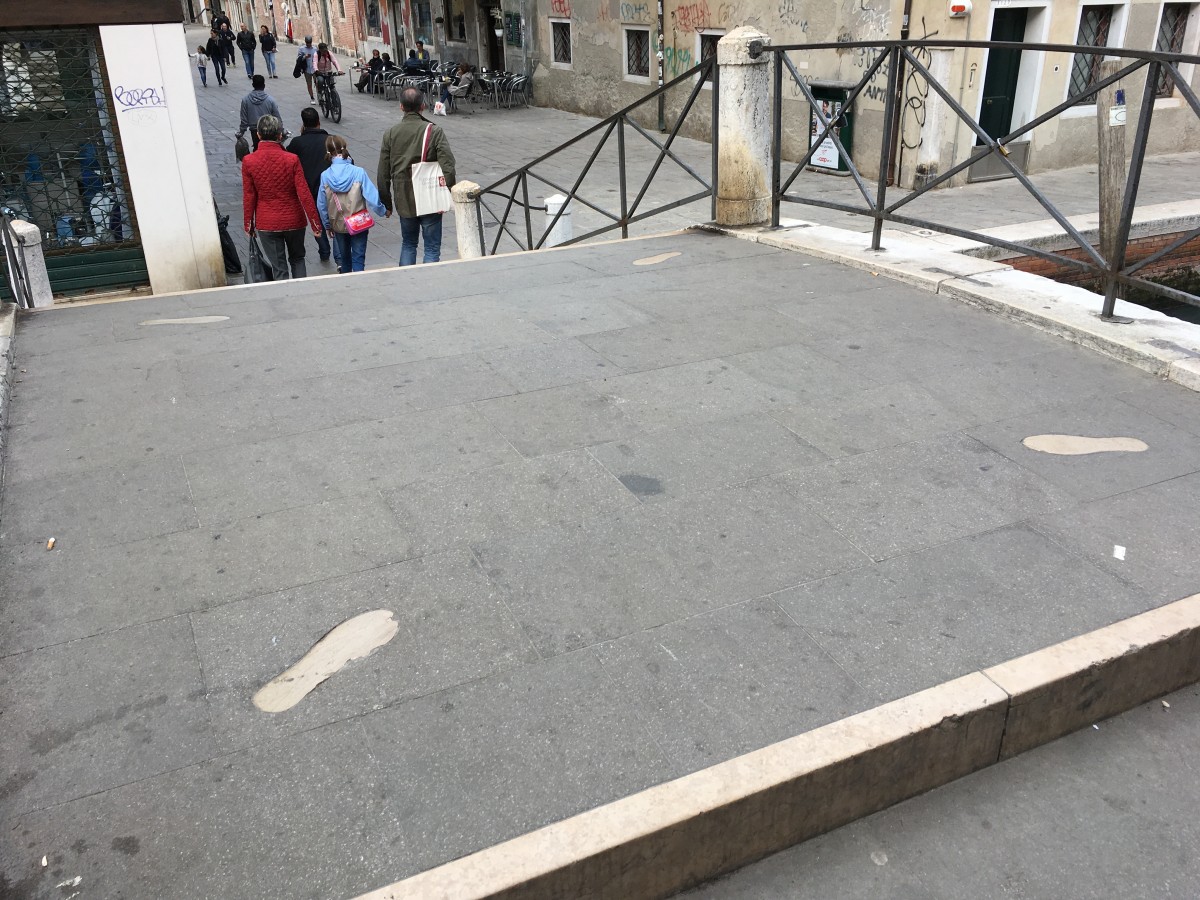 LOOK CAREFULLY. Look very carefully at the bridge just the other side of the floating vegetable barge the next time you are in Campo San Barnaba in Dorsoduro. It's the bridge that crosses into the Rio Terra Canal leading into Campo Santa Margherita.

On each corner on the top of the bridge you will note a white footprint. This denotes that the bridge is a ponte dei pugni or a fighting bridge where throughout the 16th and 17th centuries Venetian workers and tradesmen would meet, often several times a year, for a battle to win possession of the bridge. Combatants were routinely injured, maimed or even killed, by being trampled by the crowd, punched to death or else drowned in the muddy waters of the canal. In those days bridges had no parapets and handrails like they do today.

The battagliole sui ponti, little battles on the bridges, could take several forms: there could be anything from a low level punch-up between individuals and a small-scale brawl to full-on, pre-arranged wars fought over many hours with thousands of onlookers craning from balconies and rooftops surrounding the bridges.

The chief protagonists in these battles were Venice's two great geographic factions, the Nicolotti and the Castellani. They pretty much lived either side of the Grand Canal with the Nicolotti, mainly fishermen, coming from the districts of San Polo, Santa Croce and Dorsoduro, where their church was San Niccolò dei Medicanti. The Castellani contained a high number of Arsenalotti or arsenal workers who made and fitted out the warships that the Nicolotti would sail. They lived around San Marco, Cannareggio and Castello with their home church being the former Cathedral of Venice, San Pietro in Castello. The Nicolotti wore black berets and shoes whilst the Castellani favoured red hats and red shoes. Suffice to say the two sections hated one another and behaved in the manner of the most violent of football hooligan gangs even down to their own songs:

If we are Nicolotti, or near enough,

We'll march with a black face,

We'll march with a flower on our hat,

And knife with the swines of Castello.

How comes this girl loves you?

All night you are out fishing.

The favourite fighting bridges were the one we are looking at here in San Barnaba, plus Santa Fosca, della Guerra, dei Gesuiti, dei Carmini and Santa Sofia.Whoever raised their own flag on the bridge having conquered it was the winner.

On bridges of wood and stone,

And some fall in the water,

Others to the ground,

With broken legs and smashed faces.

The authorities in Venice did nothing to stop these battles because in times of war the state wanted the most aggressive, battle hardened men on its side. The war of the bridges continued until 1705 when a riot broke out on the Ponte di San Barnarba and knives and stones were produced. The combatants were so busy attempting to kill and maim one another that they did even notice that a fire had broken out in the monastery of San Girolamo and provided no help until the priest of San Barnaba had to wade in, waving his crucifix above his head in an effort to stop the bloodshed and find some assistance in putting out the fire.