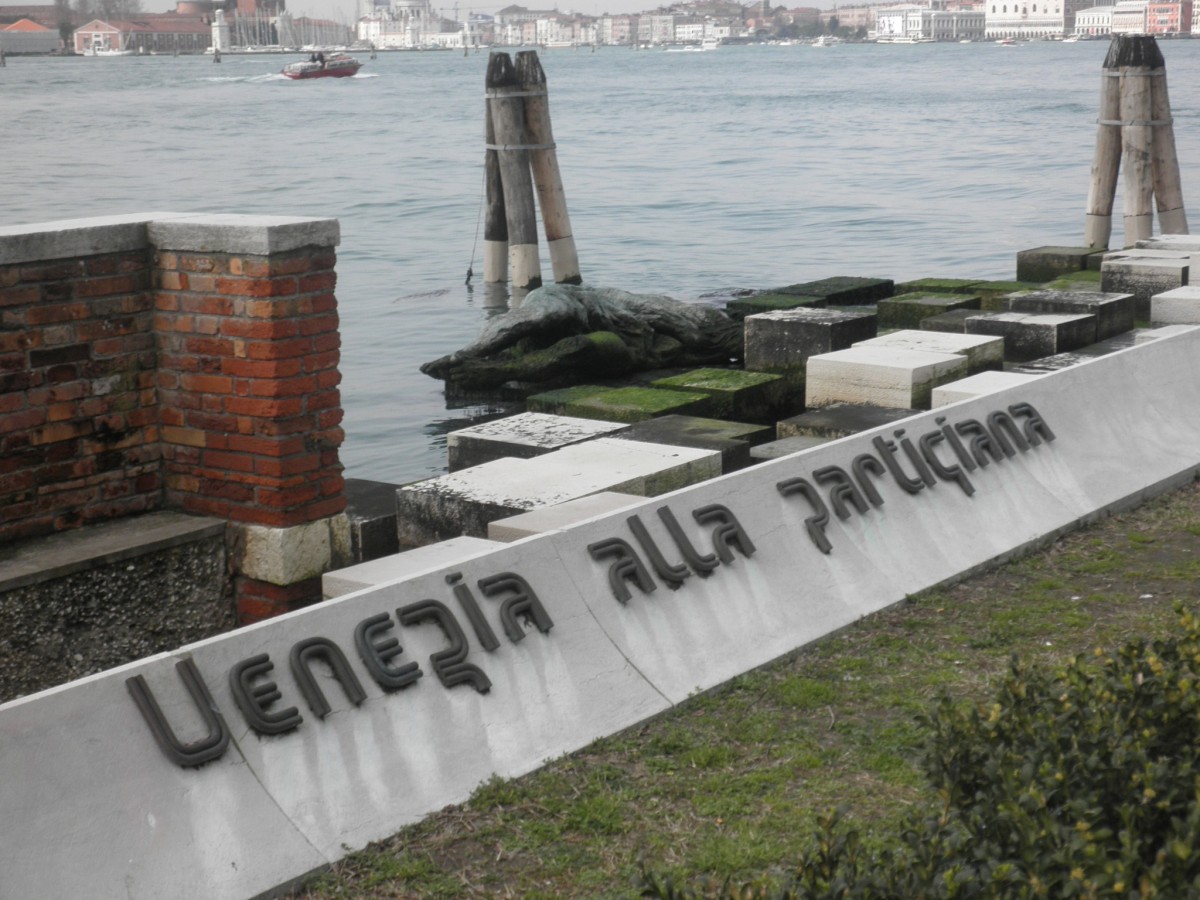 OPPOSITE THE PUBLIC gardens is a sad and mysterious monument. A sculpture of a female partisan, sprawling at the water's edge with her hands up to her face, is dedicated to the seven men who were shot nearby by the Nazis on August 3rd, 1944 bringing to the end a dreadful seven days that saw the execution of not seven but 20 men.

At 8.00 in the morning of July 26th a group of partisans loyal to the Allied cause against the Fascists entered the Ca' Giustinian overlooking the Grand Canal. What once had been the Hotel Europa had become the headquarters for the Fascist police and many political prisoners were tortured there.

The partisans were carrying crates that they said contained propaganda material to support the regime but in fact were loaded with dynamite which exploded some 90 minutes later. On July 28th orders were given to bring 13 men who had been arrested for anti-Fascist activities to the ruins left from the explosion where they were summarily executed. They were left in the rubble for another day before being taken directly to the cemetery without being given any funeral rites. More brutality was to follow.

On July 2nd a party was held on a German torpedo ship moored off what was then called the Riva dell' Impero and continues the quayside that runs from the Molo eastwards towards the public gardens. A patrol boat sentry went missing and the German Command immediately suspected a continuation of resistance activity following the explosion at Ca' Giustinian. The reprisal came immediately.

At dawn of Monday, July 3rd some 500 men and woman in the immediate Castello neighbourhood were forcibly brought from their homes at dawn and made, according to local reports, to stand for two hours on the Via Garibaldi with their faces to the wall whilst seven prisoners were brought from Santa Maria Maggiore prison in Santa Croce.

Two poles were put up on the Riva and a rope strung between them where the seven men were tied by their outstretched arms and with their backs to the lagoon in a position akin to a crucifixion. The 500 or so locals were then read the following by a German official: 'The German Command has determined to apply the reprisal of war, for which in your presence these seven persons will be shot, guilty of terrorist acts; after which we will take from you 150 hostages whose fate will depend on the current inquest.'

A priest was allowed to hold a crucifix for each of the seven men to kiss before 24 riflemen take aim and fire at the men's chests. They are not all killed by the first volley and a bullet hits the rope stretched between the poles and the dead and dying men collapse onto the quayside. The firing squad are then ordered to finish the men off with pistol shots to the temple.

By now the quayside resembles a bloodstained slaughterhouse as the seven bodies are thrown onto a boat and taken away to the cemetery with several local children given brooms and buckets and ordered by the soldiers to clean up the blood on the Riva.

A few days later, the corpse of the missing sentry washed up from the lagoon, his body untouched; he had simply got drunk on the night of August 2nd and fallen into the lagoon.

The seven men who died were: Aliprando Armellini from Vercelli, a partisan; Gino Conti, the resistance leader in Carvazere; the brothers Alfredo and Luciano Gelmi from Trento who had dodged the draft to fight for Mussolini along with Bruno De Gasperi; Girolamo Guasto from Agrigento and a Venetian, Alfredo Vivian, a partisan commander. After their deaths the Riva dell' Impero ( Quay of Empire ) became known as Riva dei sette Martiri.