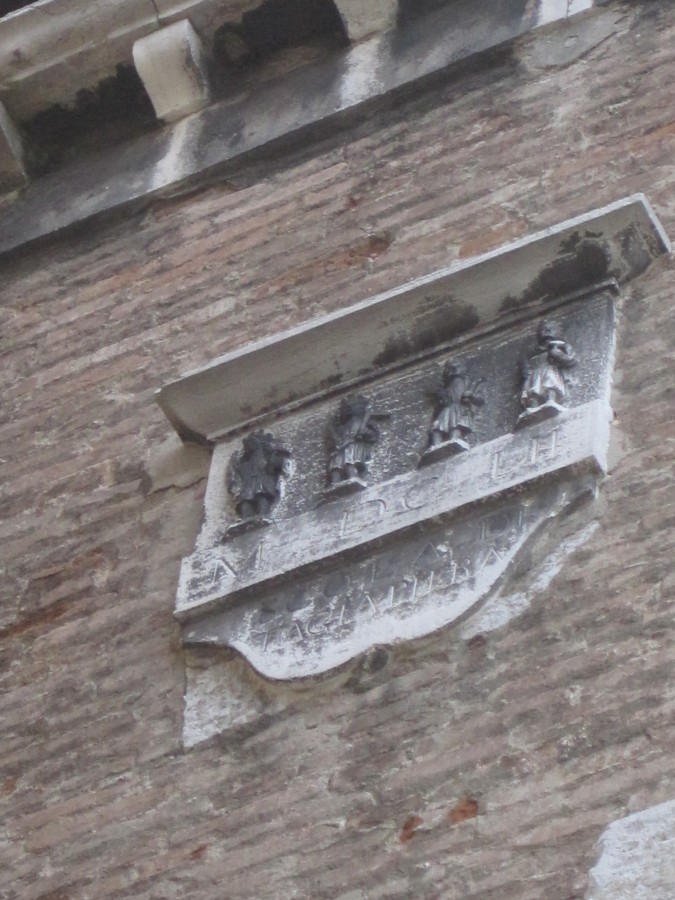 SO FEW PEOPLE look up. In England these days, with all the grim, modern shop fronts it is almost impossible to age a building without looking at the first floor level and above. Fortunately there is no such problem in Venice but even then visitors miss so much by not looking up to see what is often only a few feet above their heads.

If we are walking through San Polo and looking to see what is around the redundant church of Sant' Aponàl, apart from a very good local pizzeria that is certainly worthy of our attention, we should definitely look up.

We are looking for 1252 San Polo which was the old guild of stonecutters, Scuola dei Tagliapietra, and the second floor where there is a stone relief of four little men with crowns on their heads. These four are the patron saints of stonecutters and sculptors, and their history can get a little confusing which is why I am setting out both versions, although I firmly believe only the first version is correct.

The patron saint of sculptors is St. Castorius and his feast day is on November 8th. Castorius, Claudius, Nicostratus, and Symphorian are called "the four crowned martyrs" who were tortured and executed in 304, during the reign of Emperor Diocletian. According to legend, they were employed as carvers at Mitrovica, in modern day Kosovo, and were widely recognised for their skill as was a fellow carver, Simplicius.

The Emperor commissioned them to do several carvings, which they did to his satisfaction, but they then refused to carve a statue of the pagan god Aesculapius, the son of Apollo and god of healing, as they were Christians. The Emperor accepted their beliefs, but when they refused to offer sacrifices to the gods, they were taken away and imprisoned. When Diocletian's officer Lampadius, who was trying to convince them to change their minds suddenly died, his relatives accused the four of his death and they were tortured before the emperor had them executed.

Their death was extremely unpleasant as they were forced into lead coffins and thrown into a river. The coffins were discovered by Simplicius who attempted to recover his fellow sculptors' bodies. He too was arrested and executed which is why, in some instances, he might appear alongside the other crowned saints.

There is another story that concerns four Roman soldiers who were beaten to death with lead whips in Rome when they too refused to worship Aesculapius. These four, Secondus, Capophorus, Victorin and Severinus, also became saints but, without any association with Castorius or stone work of any kind it seems highly unlikely that they would have been embraced by sculptors and stonecutters for an appearance on the wall of their guild.

We may now move next door, and if the sun is shining, enjoy a very tasty meal sitting outside in the courtyard.