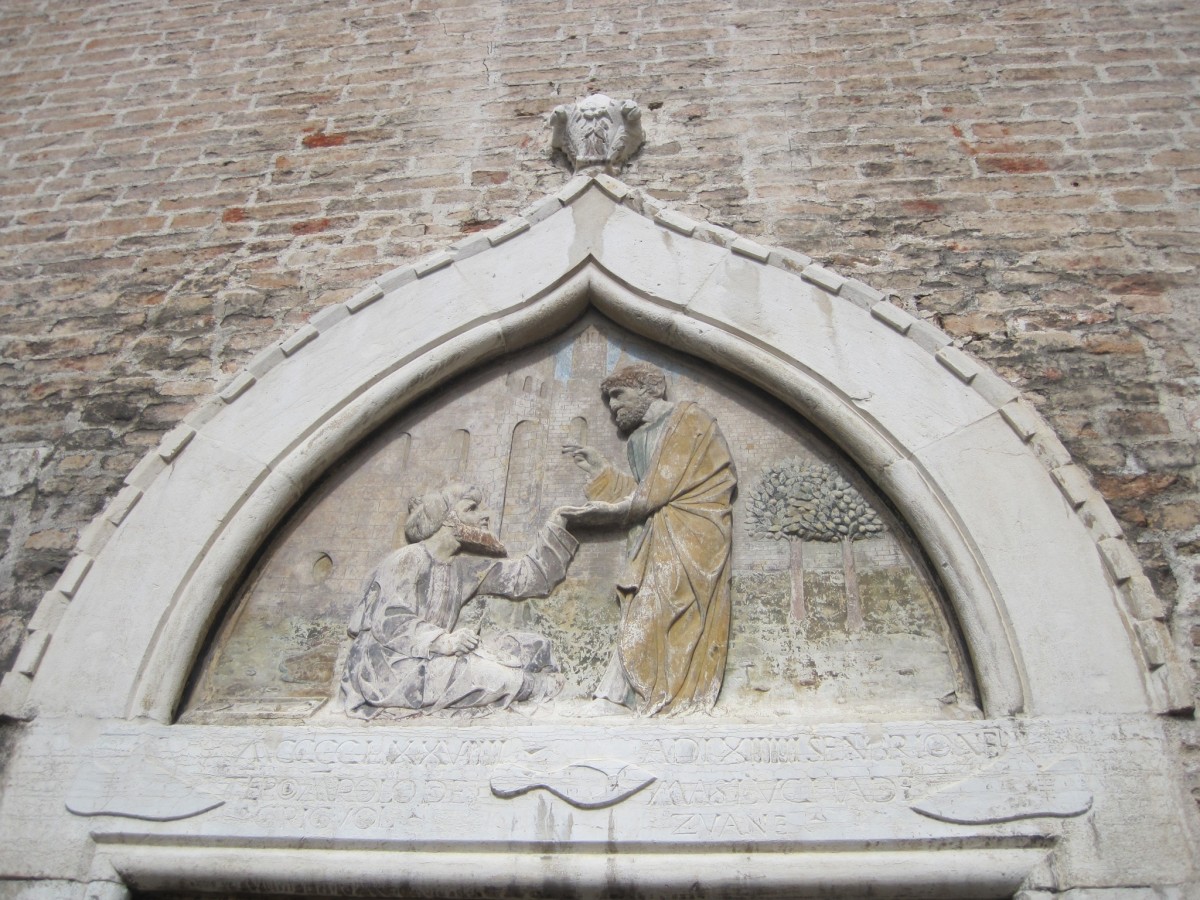 EVERYONE MUST KNOW that Saint Mark is the patron saint of Venice. What very few people know is that he is also the patron saint of cobblers. Many pass through Campo San Tomà without ever giving the old Scuola dei Calegheri a second glance, but you should because this is the old guild of shoe makers and dates back to 1446.

Often the frontage is hidden by tables and umbrellas of the local trattoria but if we walk around these to the entrance and look above the door we see a bas-relief by Pietro Lombardo showing St Mark healing the cobbler Anianus. The story goes that when St Mark was visiting Alexandria, the great Egyptian city, he tripped and tore his sandal.

He looked for a local cobbler to repair it and found Anianus and while the cobbler was working he pushed his awl, the sharp implement used for repairs, through the sandal and into his hand. He screamed in pain crying, 'Eis Theos' which is Greek for 'The Only God.' When Mark heard him mention the name of God he took some dust from the ground and sprinkled it on the cobbler's hand and spat on it. Anianus's hand was healed immediately. The relief we can see in Campo San Tomà is of the saint healing the cobbler.

However the story does not end there for Anianus was so amazed by Mark's healing hands that he asked him into his house to explain more about himself and when he learnt of Mark's belief in Christ the cobbler too decided to follow those who believed. He became a missionary and turned his home into a place where people could worship and where he could baptise them in secret because Christianity was forbidden in the city in those days. But Anianus continued in his teachings and finally became the bishop of Alexandria and his house in the city is said to be where the church of St Mark stands today.(http://www.sacred-destinations.com/egypt/alexandria-st-mark-coptic-cathedral)

Other scenes of St Mark healing Anianus can be seen at the Scuola Grande di San Marco where Tullio Lombardo, the most gifted of the Lombardo sons, sculpted the two low level reliefs of Mark holding Anianus's injured hand and then baptising him.