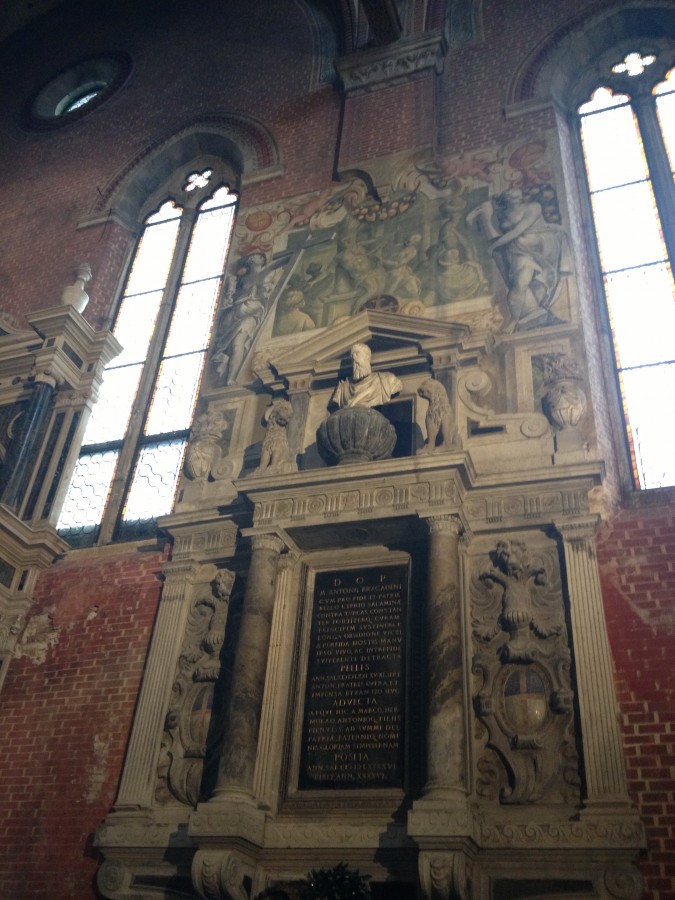 THE CHURCH OF Santi Giovanni e Paolo was begun by Dominican friars in 1246. There are 21 doges buried here but the most appalling death occurred to one who is remembered in an altar on the right hand side of the church, Marcantonio Bragadin. The fresco shows his dreadful fate in Famagusta in Cyprus during 1571.

Bragadin was appointed Governor of Cyprus, a Venetian colony, in 1569 that was besieged by Turks a year later. First they captured Nicosia and sent the head of the garrison commander, Niccolò Dandolo, to him in Famagusta where he had his headquarters. Some 200,000 Turks were attacking 6,000 Venetians although the gallant defenders managed to hold out for nearly a year.

However they were eventually overrun and Bragadin's punishment for defending the city so obstinately was to be skinned alive. His skin was stuffed with straw and dressed with his uniform, displayed as a trophy and led around Famagusta on an ox. His head was mounted on the ship of the Turkish commander, Lala Mustapha Pasha, and taken back to Constantinople.

His skin was stolen from the Constantinople arsenal a few years later by a Venetian slave named Gerolamo Polidori, who escaped and brought it back with him to Venice. The urn below the bust of Bragadin contains the poor man's skin.

To lighten the mood after this grim contemplation of such a dreadful end consider the walls of Zanipolo. If you look closely you will see that this huge brick built church has had plaster covered over the bricks so that artists can paint something on the walls. It may give us an insight into the Venetian mental condition to see that the artists decided that the best thing to paint on the plaster covering the bricks was, er, bricks.